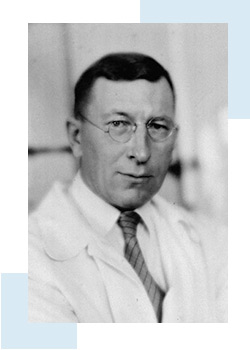 In 1921, Dr. Frederick Banting discovered insulin, enabling people with diabetes to live long and healthy lives. The discovery won him the Nobel Prize in Physiology or Medicine for 1923, worldwide acclaim and, in 1934, a knighthood from the British Crown.

Born November 14, 1891, in Alliston, Ontario, Frederick Banting was the youngest of five children. After earning a medical degree from the University of Toronto in 1916, he joined the Canadian Army Medical Corps and served in France during the First World War, where, in 1919, he earned the Military Cross for heroism under fire.

In 1920, Banting began to focus on the problem of diabetes. At that time, people with diabetes faced shortened lives, blindness and lost limbs due to their body's inability to produce insulin, a naturally occurring hormone that turns sugar into energy. Banting and Dr. Charles Best, then a medical student, working in an overheated and underfunded laboratory, conducted experiments on dogs, refining insulin samples for human use. On January 23, 1922, the researchers gave their insulin serum for the first time to a human, 14 year old Leonard Thompson, who experienced an almost instant recovery. The discovery was not a cure, but it was a treatment for a previously untreatable disease. Banting and Best did not seek a patent for their discovery, instead selling the rights to the University of Toronto for $1, as a means of ensuring that insulin could be available to all those who needed it.

"With the relief of the symptoms of his disease, and with the increased strength and vigor resulting from the increased diet, the pessimistic, melancholy diabetic becomes optimistic and cheerful. Insulin is not a cure for diabetes; it is a treatment."

In 1923, Banting was elected to the Banting and Best Chair of Medical Research at the University of Toronto. There, he worked on the problems of silicosis (a form of respiratory disease caused by inhaling silica dust), cancer and the mechanisms of drowning and how best to counteract them. Among his successes was the creation of the world's first G-suit, to help pilots cope with high-speed flight. He was also well-known as a talented amateur artist.

During World War II, Banting served as a liaison officer between the British and North American medical services. He was travelling to England in this capacity in 1941, when he died in a plane crash in Musgrave Harbour, Newfoundland.